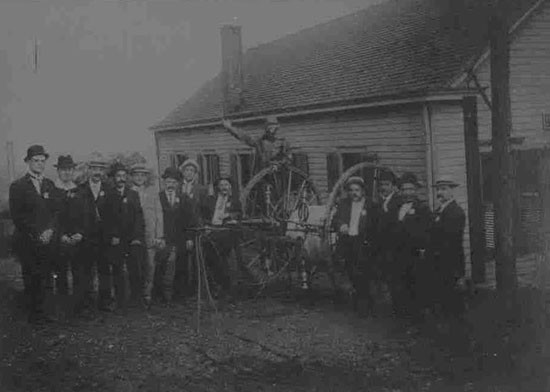 Realizing the necessity for fire protection in the Ashley Heights section of Hawthorne, 35 citizens of that vicinity gathered together on the evening of November 15, 1915, at the rooms of the Mohawk A.C., 39 Mohawk Avenue, where the organization of Hawthorne Fire Company No. 2 took place. Great enthusiasm was displayed as the company was formed. 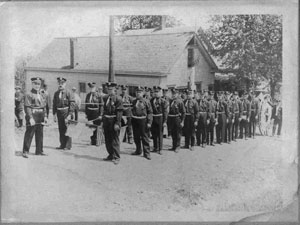 Thirty two of the thirty five men present signed the roll at the organization of the company, and headquarters was established at the rooms of the Mohawk A.C. The membership began to increase in the time after the organization of the company. At the time, the company was equipped with a large hose cart capable of carrying 800 feet of regulation sized hose, hand fire extinguishers, and various hand tools. The company was always in the state of readiness in case of an alarm. Several fire alarms were soon distributed about the hill section at principal points. It was important for residents to quickly be able to turn in an alarm in the event of a fire. The company was very proud of the fact that it maintained a record of 100 percent for attending fires in the borough.

Numerous entertainments and social affairs were successfully given by the company, being ably assisted by the Ladies’ Auxiliary who was the heart and soul for the success of the fire company. Their activities to raise money for the fire company included bake sales and rummage sales, card parties and candle sales. They also held social activities that brought them to the theater, out to dinner, and joint ventures with the other auxiliaries of the borough. Charter members of the auxiliary included, Florence Bay, Louise Bay, Florence DeBrock, Sue De Salvo, Pera Judge, Clara Buono, Elsie Pomidor, Margaret Hollman, Emeline Bay, and Betty Silvestri. 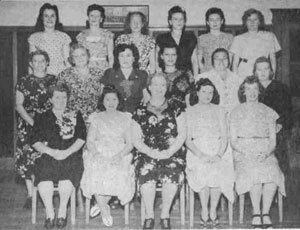 In order for the residents of Hawthorne to receive the benefits of a reduction in home and commercial insurance rates, the Borough asked the fire companies to come under their control and regulations in 1916. The company readily agreed and then reorganized on February 10, 1916 and became Hawthorne Fire Company No. 3 as we know it today. At the time, Fire Company No. 3 boasted the largest membership of the three fire companies.

Hawthorne Fire Co. No. 3 received its first motorized fire apparatus, a REO Speedwagon in 1926. This was a huge step forward from the first hand-drawn cart. In 1937 an American LaFrance 750 gpm pumper was placed into service. The American LaFrance remained in service for 24 years until the borough decided to replace two of the fire apparatus in 1961. Two Seagrave, open cab, 1000 gpm pumpers were placed into service; one going to Fire Co. No. 1 and the other to Fire Co. No. 3. In 1984, all four of the current fire apparatus were replaced. Three Hahn 2000 gpm triple combination pumpers were placed in service along with an 85’ tower ladder. 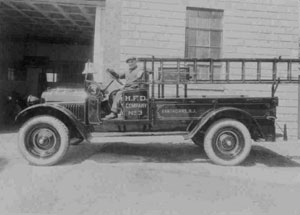 Fire Co. No. 3’s Seagrave pumper remained in service and was converted to a foam unit until it was taken out of service in 1995. Shortly after, the apparatus was donated to the St. Baranabas Hospital to be used for delivering the message of fire prevention and education to children. Fire Co. No. 3 took delivery of its current fire apparatus, a 2001 Seagrave pumper in October of that year following the terrorist attacks in New York City, Washington, and Pennsylvania. The statement “50 miles to Bahgdad” appears in the goldleaf of the maltese cross on the driver’s side door as U.S Troops were making their way through Iraq at the time.

This apparatus is very different from any of the previous as it offers ten riding positions, a completely enclosed cab, a top mounted pump, and a forty gallon foam cell.

Fire Company No. 3 moved from 39 Mohawk Avenue to 83 North Eighth Street on the corner of Mohawk Ave in the early 1920’s. In the years to come, the building was expanded through the lot to Goffle Road, and has been renovated again since then. Today, the engine leaves the apparatus bay on the Goffle Road side, and the North Eighth Street side is the entrance to the rental hall. Fire Company No. 3 continues to carry on the traditions of its predecessors by protecting the residents of Ashley Heights and all of Hawthorne using state of the art firefighting equipment. 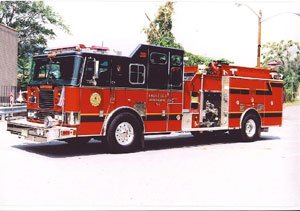 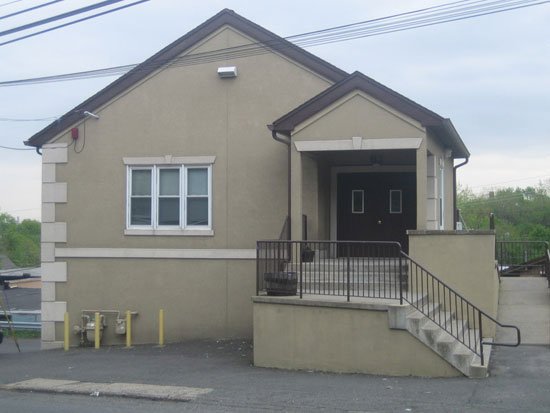 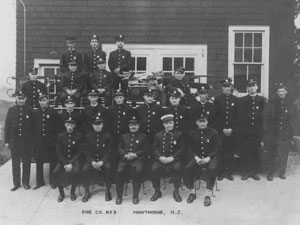 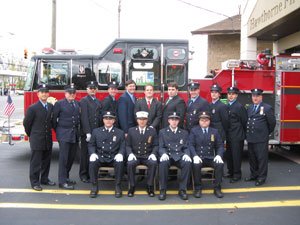 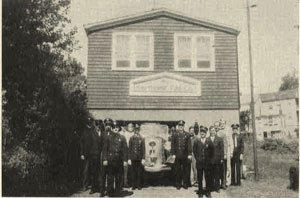 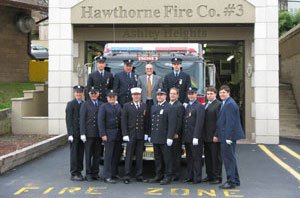 FIRE COMPANY NO. 3 FIRE APPARATUS THEN AND NOW 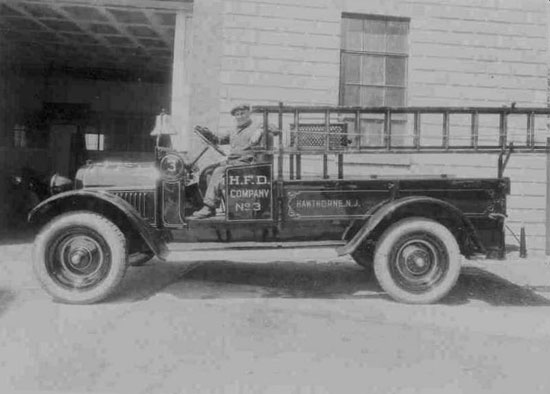 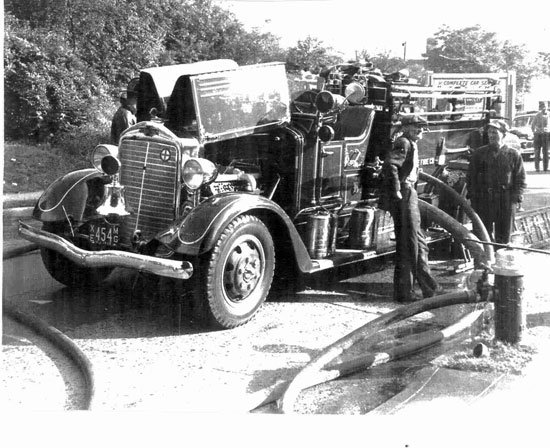 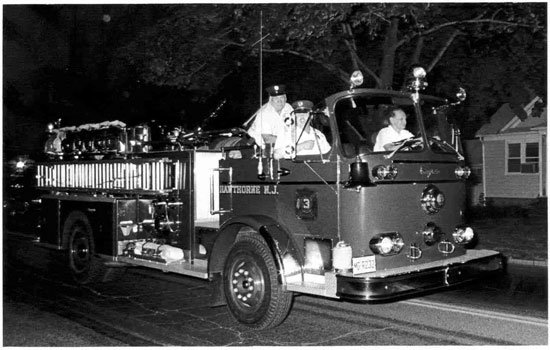 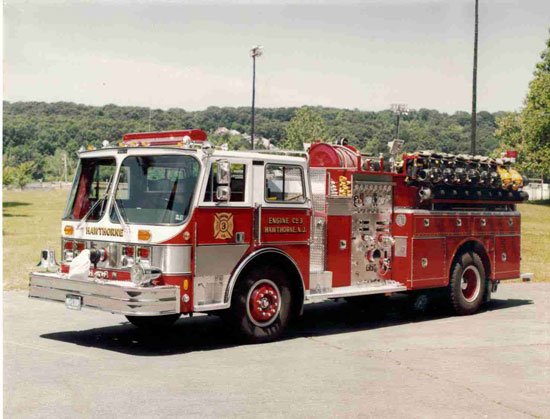 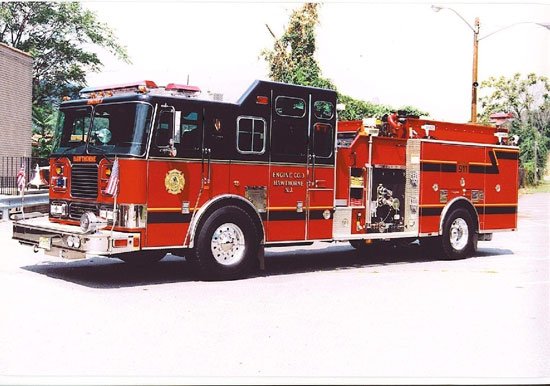 Back to Our Companies